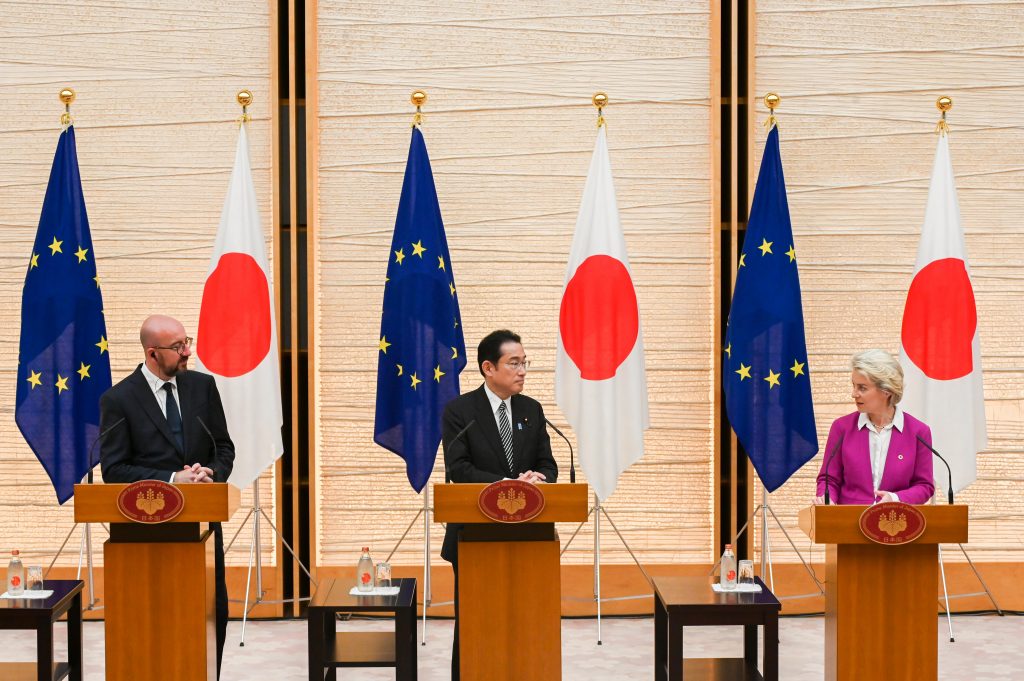 The 28th EU-Japan Summit took place on May 12 in Tokyo, serving as a display of the proximity, depth and dynamism enjoyed by the institutional relations held between Japan and the European Union. The President of the European Council, Charles Michel, and the President of the European Commission, Ursula von der Leyen, met with Japanese Prime Minister, Fumio Kishida, going over great public interest issues, such as the conflict between Russia and Ukraine, the international energy market or the opening of a new line of digital cooperation between both regions.

After two troubled years, diplomatic leaders finally had their chance to meet in person for the first time since 2019. The historic outbreak of COVID-19 put a stop to the 2020 edition, whereas last year, the annual reunion was turned into a teleconference meeting.

The day of dialogue kicked off past 10 o’clock in the morning (Japanese time) with the formal reception by the Japanese Prime Minister for the Presidents of the European Council and Commission. After the friendly greeting from both parties and the welcoming ceremony by the Japanese honor guard, representatives from both regions talked over a wide range of topics during the plenary session preceding the joint press conference, in which a large number of relevant statements were made public through press coverage. After speaking to the media, President Michel and President Von der Leyen were invited by Prime Minister Kishida for the official lunch that put an end to the meeting between European leaders and the head of the Japanese government.

As one would expect, the armed conflict between Ukraine and Russia captured much of the attention during the leaders’ discussions. Both regions reaffirmed their cooperation to continue supporting Ukraine in the political, financial, material and humanitarian framework, while condemning once again the Russian military aggression by calling for an immediate cessation of violence in Ukrainian territory. A new line of cooperation was also opened for the search of stability in global energy markets, ensuring diversification and security in the supply of energy in order to mitigate Europe’s energy dependence on Russia.

The leaders also expressed serious concern about the numerous problems faced by the Southeast Asian region, conveying again their disagreement with the continuous testing of ballistic missiles and weapons of mass destruction made by North Korea. Words were also spoken addressing the People’s Republic of China, urging the Asian giant to ease historical tensions caused by the administration of the Senkaku Islands, located in the East China Sea. This small archipelago has been claimed since the 60s by the government of the People’s Republic of China and the Republic of China (Taiwan), although it has been officially administered by the Japanese government since 1972, the year in which the United States returned administrative control of Okinawa to Japan.

Both the European Union and Japan will cooperate to secure freedom, unity and security within the Indo-Pacific and Southeast Asian regions, while expanding their political-economic relations with China, from which greater assertiveness and involvement in multilateral relations is expected.

In the words of the leaders, all these conflicts do nothing but highlight the vital need for solid strategic alliances that stimulate deep and close cooperation. In the face of this need and with the aim of preserving a world free of nuclear weapons, the European Union and Japan have made a resolution to intensify their collaboration in security and defense, advancing towards better crisis management, a greater capacity to counter threats, and new cybersecurity programs capitalizing on the technological potential of Japan.

The breakthrough of a digital alliance

In fact, it is the overwhelming technological development that has given Japan the honor of being the first country in the world to sign a Digital Partnership Agreement with the European Union. Based on a positive vision of the economy and the digital society, this milestone got to capture everyone’s attention at the summit held in the Japanese capital, ensuring a digital transition framed within different criteria, such as solidarity, prosperity and sustainability. Areas covered by this historical agreement include future 6G technologies, high security AI applications, green-data infrastructures and the development of digital tools for employees.

At this point, relations between the EU and Japan are full of intensity and bilateral involvement, allowing them to undertake ambitious projects such as the EU-Japan Green Alliance, an initiative launched during last year’s summit aimed at combating the harmful effects of climate change and environmental degradation, in addition to promoting the technological and energetic business transition, moving on to a greater protection of the environment set in an atmosphere of sustainable employment and finances. For the EU, it was the first time that an agreement of this kind had been signed with a partner country, raising great expectations about the progress to be achieved this year on the project. By now, both governments are preparing a strategic plan establishing the priority actions to take in order to start the implementation phase, which is expected to begin at the end of July this year.

Finally, Japan has reasserted its willingness to join the Horizon Europe program, integrated into the European Union’s framework of innovation and research framework. If it comes true, it would certainly strike as excellent news for the thousands of students from both regions who could benefit from exchange and cooperation programs in which to share knowledge and experiences that continue to bring both sides of the world closer together.

Japan: An essential ingredient in the European recipe

Relations between the European Union and Japan date back to the 1950s, when the European Economic Community was born. Since then, Japan has established itself as a vital partner for the old continent, standing out as one of the main commercial allies and adding together up to more than a quarter of the current global GDP. In the political sphere, it is the only Asian country linked to the EU by a Strategic Association Agreement, which was signed twenty-one years ago, making of Japan one of Europe’s best strategic partner in the Indo-Pacific area.

The next EU-Japan summit is set to be held in 2023. Historically, both regions have alternated their hosting duties each year, therefore it could be expected that executive heads will meet again in Brussels next year in order to continue strengthening the bond that unites two of the greatest political-economic powerhouses in the world.