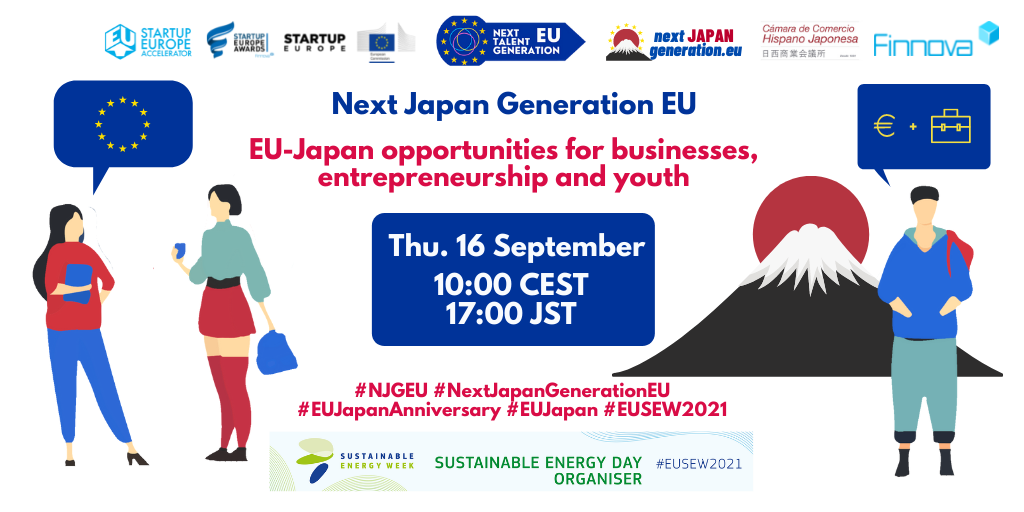 The Next Japan Generation EU webinar addressing EU and Japan opportunities for enterprises, entrepreneurship, and youth was successfully held on Thursday 16 September. It featured experts and attendees wishing to find out more information about these cross-border relations.

It served as a forum to create new synergies between Japan and the EU. This event was held within the framework of EU Sustainable Energy Week and the third anniversary of the signature of the Economic Partnership Agreement in 2018.

This event, which was organised by Finnova Foundation, a non-profit organisation specialising in EU funds, was broken down into four panels addressing several topics.

Finnova Foundation CEO Juan Manuel Revuelta kicked off the roundtable with a panel devoted to give some background about the trade, economic, diplomatic, and work links binding the EU and Japan. This panel featured the contributions of experts on EU affairs such as Sylwia Czerska, First Secretary at the Trade Section of the Delegation of the European Union to Japan, Noriko Mita, Manager in EEN Japan at the EU-Japan Centre for Industrial Cooperation, Manuel de la Gándara, who spoke on behalf of Miguel A. Martínez Massa, President of the Spanish Japanese Chamber of Commerce, and Jean Aznar, Secretary General and Co-founder of Diplomatic World.

Commenting from their specific areas of expertise, panelists offered an overview on these bilateral relations which build on technology, diplomacy, media, trade, and, above all, the benefits resulting from engaging in these synergies. Speakers outlined the different opportunities that Japan offers for new projects capable of enhancing daily processes.

During panel 2, attendees learnt about the experiences of two Japanese entrepreneurs, i.e. Masashi Ueda, Incubation Manager at Keio Fujisawa Innovation Village – who encouraged future entrepreneurs to take the lead and scale up their businesses –, and Koju Ito, AZUL Energy, CEO, who discussed their innovative project on sustainable batteries.

Panel 3 dealt with the different training opportunities meant for European and Japanese youth. The EU puts at their disposal several mobility programmes in EU Member States and associated countries. Alberto Navarro, Training & HR Manager at Finnova Foundation; Tom Kuczynski, Science and Technology Advisor at the Delegation of the European Union to Japan, and Judit Erika Magyar, Country Manager at EURAXESS Japan, outlined some of the programmes university students and young entrepreneurs and researchers can apply for. These mobility experiences are felt to be a positive means to strengthen EU-Japan relations.

The event was wrapped up with a panel devoted to the role of EU funds in EU-Japan relations. Juan Viesca, EU Funds Director at Finnova Foundation, discussed the funding opportunities that Europe offers to innovative projects in sustainability, energy and digitalisation – three of the most important pivots to meet the goals set out in the 2030 Agenda.

Mr Viesca mentioned the EU funds that can be accessible for enterprises operating in Japan as well as Japanese projects aiming to land in Europe.

As a proof of EU-Japan relations and the successfulness of programmes for youth, Hayato Maemura, Japan-EU Innovation Cooperation Assistant in Finnova Foundation, gave an account of his experience to attendees.

To finish the event off, Juan Manuel Revuelta gave his opinion on these synergies and thanked the participation of both speakers and attendees. As Mr Revuelta pointed out, “the time has come to create new processes, new synergies showing the benefits of the cooperation of two big powerhouses – Europe and Japan – in the wake of Covid-19”. In this sense, European projects such as LIFE ECOdigestion 2.0 can serve as a source of inspiration in managing wastewater treatment plants in Japan, among other examples.

The webinar was held in Japanese and English, and Mr Maemura provided simultaneous interpreting in both ways. By holding this event, Finnova Foundation aims to bring closer Japan to Europe and Europe to Japan and to foster future partnerships between both regions.

About the Delegation of the European Union to Japan

About the Spanish Japanese Chamber of Commerce

Finnova Foundation is a Belgian-Spanish foundation which helps institutions and organisations getting funds for innovative projects. It aims to promote private-public cooperation through innovation in order to address social challenges, e.g. employment, training, entrepreneurship, SDGs, circular economy, etc. Finnova is in charge of organising Startup Europe Awards, a joint initiative by Finnova and the European Commission to reward the best European start-ups.

Startup Europe Awards is an initiative by DG CONNECT and has been implemented by Finnova Foundation since 2016. Startup Europe Awards is an open innovation mechanism to identify disruptive start-ups and to promote private-public partnerships. They also seek to raise awareness on the importance of self-entrepreneurship as a driving force for job creation. In addition to promoting networks to meet the UN SDGs and the European Green Deal objectives, they also contribute to the circular economy, sustainable tourism and the fight against climate change. For more information, click on https://startupeuropeawards.eu/seua/